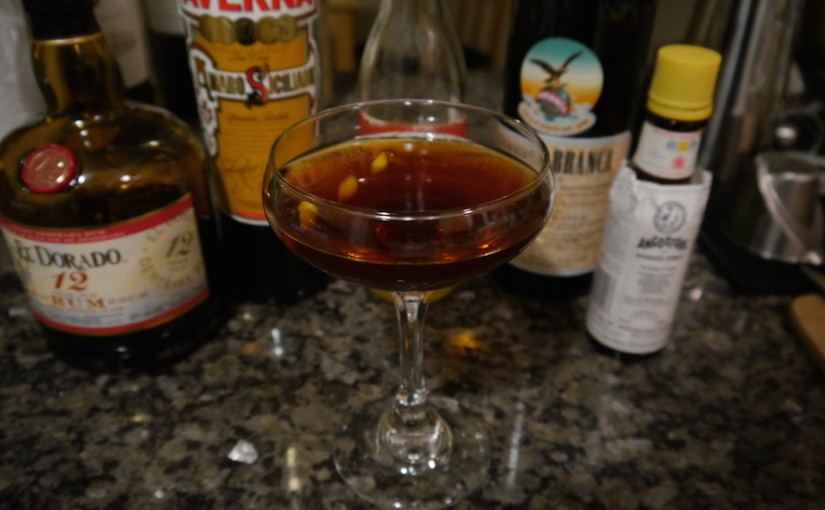 I will admit, I picked this out mainly because of the name. It turned out very nice, much sweeter than I was expecting. The tiny bit of Fernet means it’s not as offensively medicinal/minty as many Fernet drinks can be. 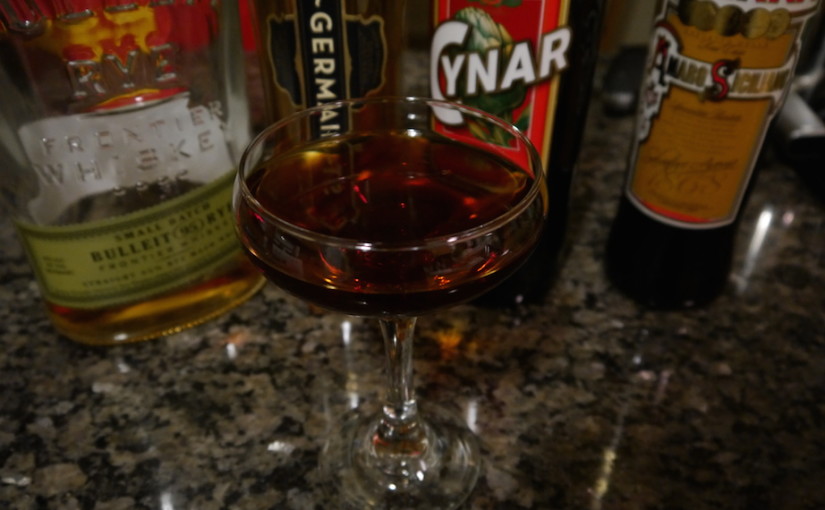 I expected this one to be too bitter for me, but the St Germain gave it a nice sweetness that I really liked. A great after-dinner sipper, plus it’s got a great name. 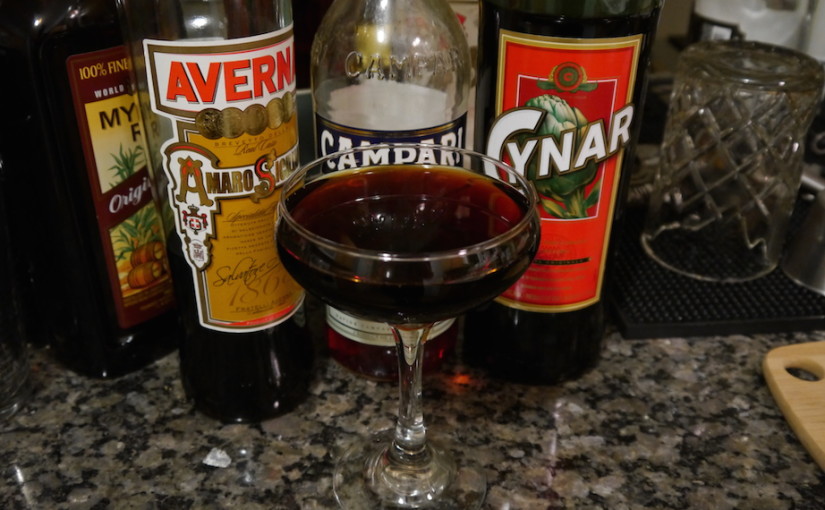 William went to Midnight Cowboy last week with some colleagues and brought me back a special menu from a guest bartender, which of course the cats promptly chewed up. I managed to salvage it enough to be able to read some of the recipes, and this one stood out immediately as something that Dane would like. It’s bitter and vegetal and earthy and he loved it. 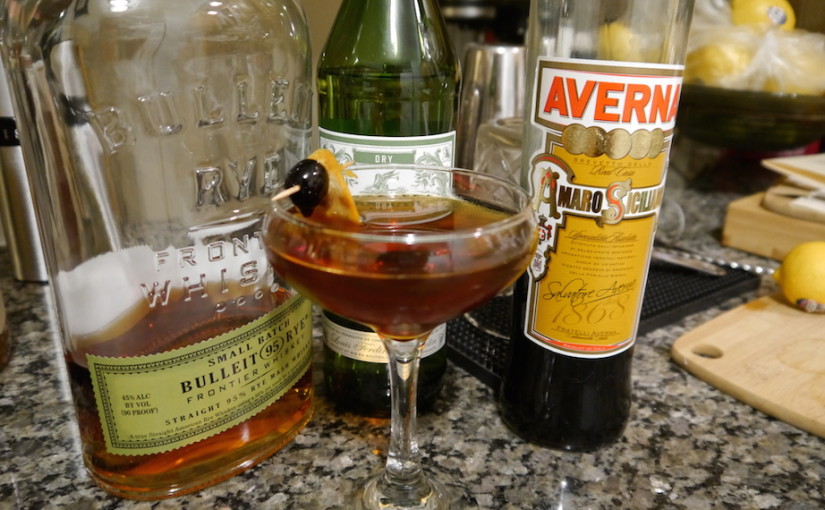 This afternoon William and I introduced some friends to Jodorowsky’s Dune, a documentary that we saw at Fantastic Fest 2013. It’s a really amazing film about when Alejandro Jodorowsky tried to make Dune into a film in the late 70’s. The film was never actually made, but it influenced many films for years after even so, and many of the creatives on the project went on to continue working relationships to make some of our favorite films. (Alien, in particular, would probably not have existed in the same form if Dan O’Bannon, H.R. Giger, Chris Foss, and Mœbius had not worked together on Dune.) We had some great discussions on the creative process and how the film landscape of America might be completely different had this film been made.

Afterwards we went for drinks at Whisler’s in East Austin. Whisler’s bartenders are famous for their “three questions” on slow nights, where they ask you three questions and then custom make a drink. It being a Saturday night it was far too busy for that, so we ordered off the menu. I had a classic Zombie, but another friend had their version of the Manhattan called a Brooklyn. I made sure to make a note of the ingredients and as soon as I got home I knew I wanted to recreate it for tonight’s drink. I think I did a decent job of it! You might increase the Averna if you want a more fragrant drink. 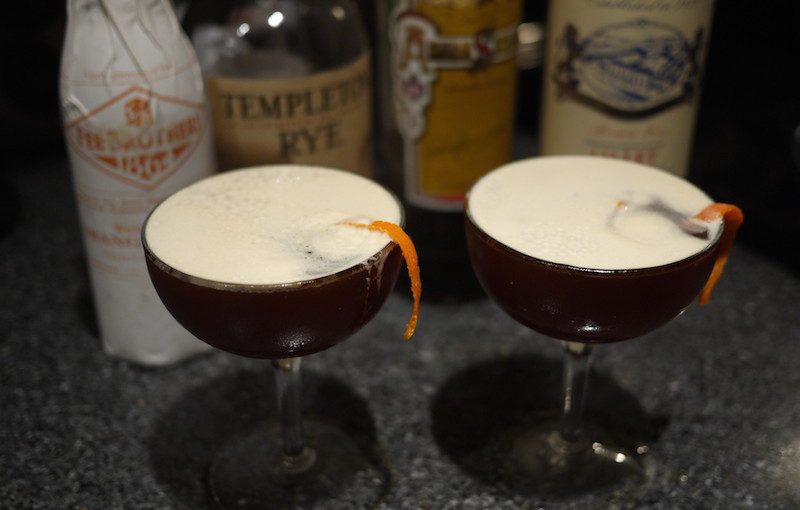 Oh, god. I had cocktails at Peche tonight to celebrate a friend’s new job, and they had a special called The Uptight. I can’t quite remember exactly what was in it, and I think I may be combining two different drinks in my head, but I’m pretty sure I was close. (Rye and Amaro Montenegro for sure, though I only had Averna to use.) I was mixing at William’s tonight, so he always has Lillet that he’s added quinine to for some old-fashioned Kina Lillet. I was almost done when I accidentally unscrewed what is actually a flip top lid on the orange bitters and dumped a huge amount into the drink. I figured I’d try it anyway. 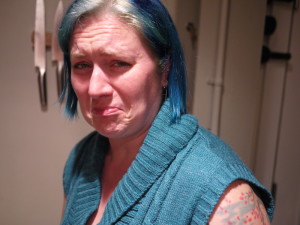 Boy, that was a mistake. They can’t all be winners, I suppose. I’m going to see if I can get the actual recipe and redo this sometime soon. Always check your lids, folks. 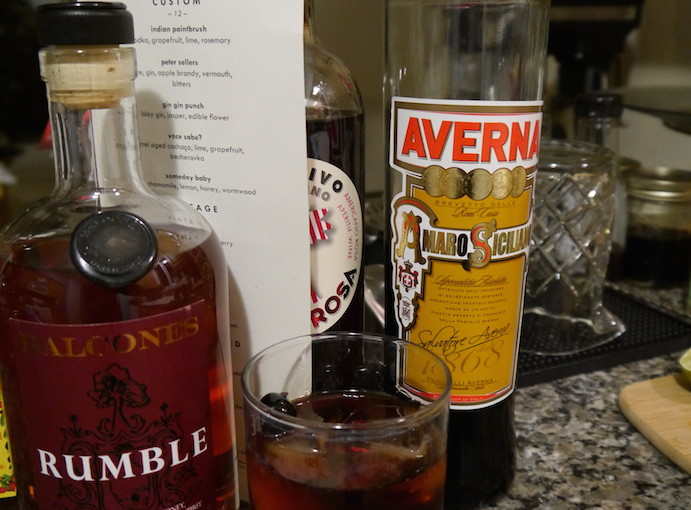 Today I spent recovering from a truly epic hangover. I went to a Drunk History themed party last night and pre-made some cocktails to take with. One was a vodka drink, since I almost never drink vodka and have a ton of it in the house. I mostly drank bourbon all night but did have about half a glass of that vodka cocktail, and I really think that’s what did me in. I don’t think I’ll be using that brand again.

In any case, it should be obvious that I wasn’t really feeling like making a drink tonight. I decided I wanted to make something using the Rumble which I just acquired yesterday. Garage is a wonderful bar inside of an old valet station downtown. Their latest menu had the Black Manhattan, which has rapidly become one of my favorite drinks. Their recipe calls for rye, punt e mes, and Averna. The only rye I have in the house right now is Whistle Pig which I am loathe to use in mixed drinks too often (it’s usually more of a sipping whiskey), and I don’t have any punt e mes. So I substituted the Rumble and the Cocchi instead. The Rumble is nice in this drink, lending a bit more sweetness than a rye would. I definitely think I’ll make this variation again.